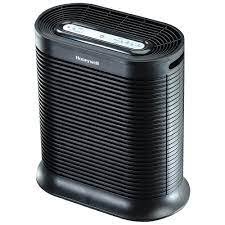 Whiney
I did a lot of research before buying this item. Mostly concerned about noise, because if you can't take the noise it doesn't matter how good an air cleaner it is. Since there were so many different opinions on this, i needed to try for myself. There is a very distinct engine whine. I do not mind th...
2/5
Me0in0houston
6 years ago
walmart.com
good air purifier
When I received the air purifier I only needed to take the filters out of the plastics; put them in their places; and plug it in. It was a quick process.
The air purifier is not too big for my son's room. There are 4 levels. On the first two levels it is quiet enough; perhaps even soothing and helps...
4/5
tex97
7 years ago
walmart.com
My worst purchase ever
This is the poorest design I have ever encountered. The front removable panel would not stay closed. Noise level was to high. Controls very difficult to use and slow to respond.
Packed them both up and returned to the Walmart. I can remember when Honeywell was a quality company manufacturing quali...
2/5
Lefty
6 years ago
walmart.com
Not for us
First one of the connectors the hold the Grill in place was broken, actually a minor problem. The reason we returned it was that it was way too loud to have in the bedroom.
2/5
Rusty
7 years ago
walmart.com
honeywell HPA 300
Cheap plastic housing making access to filters tricky. Timer is not accurate. The unit does do as advertised. In just a week my coughing and snoring have been reduced.
4/5
bird
7 years ago
walmart.com
Noise
Too noisy on third and turbo speed (sounds like a jet engine idling on the runway just before takeoff).
2/5
Buddy
6 years ago
walmart.com
UPDATE 01/18/20 - Very Highly Recommended - Fantastic HEPA Air Filter at a Bargain Basement price.
*UPDATE 01/18/2020* After almost 4 years of continuing use of my Honeywell Hepa Air Purifiers they are still going strong! I now have 3 of these amazing machines, having replaced all three of my round Honeywell air filters. With regular maintenance and filter changes these air purifiers still do an ...
5/5
Tom F.
7 years ago
amazon.com
I've owned an HPA300 for 5 years and just added a pair of HPA100 for the smaller areas
I first bought the HPA300 back when Western Washington had major wildfire smoke. It helped a lot. It also cuts down on critter smells, dust in-general, helps fix when I accidentally set the smoke alarm off, and so on. I just added a pair of HPA100s for the smaller rooms instead of carrying the 300 a...
5/5
Betti
3 months ago
amazon.com
7-Zyrtec-a-Day type of allergies
My allergies were so severe I was taking 7 Zyrtec a day to manage them. Dust & dust mites are the BIGGEST trigger for me, and unfortunately those allergens are present all day, all year, especially with a cat. We vacuumed and dusted every day and I still had super severe congestion and constant snee...
5/5
GM
4 months ago
amazon.com
Best air purifier I've ever had - by far!
I've struggled with major mold allergies and just weak immune system/sleep/breathing issues in general. I've tried so much stuff over the years. Dyson was the biggest rip off ever and made me feel dizzy constantly so I was afraid to try again, after moving into a 'new' house with clear issues in the...
5/5
John Hudson
4 months ago
amazon.com