What is Looria?Sign up
Open menu
Upright Vacuum 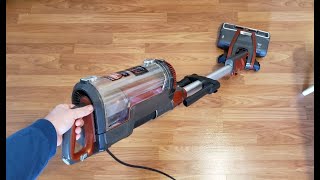 Shark Apex Uplight Vacuum Cleaner Review and Demo
I do think that this could be your only vacuum. So that's great, I did a great job on carpet and bare floors that power heads really beefed up.

Positive
RTINGS
10 months ago
rtings.com
Shark APEX UpLight
Overall, this vacuum performs well for any type of use.

Positive
Dagobiet Morales Alfaro
8 months ago
rtings.com
Great Vacuum, but once it breaks, it's tough to get parts for
I thought going with a Shark vacuum was a no-brainer. They've made great products and when things break you can get the parts to fix them. This vacuum model is a one-off. Meaning many of it's parts are unique and not shared across models. Our vacuum's secondary brush broke and I figured, no problem,...
3/5
wstlyguy
2 years ago
amazon.com
Pros and cons
Now that I've used this vacuum for several months, I am able to give a review based on real-life conditions. Pros: *Very strong suction, which is clearly key to a good vacuum! *Delightfully lightweight. *Long cord. *Scoots underneath a lot of furniture. *Strong lights effectively illuminate its path...
3/5
Lincoln Chispas
2 years ago
amazon.com
Suction
I have owned a shark, Dyson. This vacuum is in the cheaper side of vacuums , the orange wheel for hard wood floors will pop off without notice very easily. It doesn’t have good suction., it will pick up a little larger items but clog, to empty you have to unhook bottom from top and then take the top...
3/5
Mike & Janet Cockrell
3 years ago
amazon.com
Ok vacuum, cheap manufacturing, malfunctioning parts and not great design
Well originally I think I gave this vacuum a 4 or 5 star, I really liked it. Then I tried to use the hose part and realized it was rather short and hard to use. Now 1 year and 5 months later it’s broken, doesn’t work, and isn’t covered under warranty. So $120 later I’ll be paying for the entire bott...
3/5
Kelsey A. Maynard
2 years ago
amazon.com
Wish I could but CANNOT recommend this product
Let me just say the slim design of the vacuum makes it so much easier to get under tables and beds. Cleans the carpets wonderfully very strong suction . The self cleaning hair brush does not work all the time majority of the hair still ended up in the container but we were still having to remove hai...
3/5
Meghan
2 years ago
walmart.com
Bulky & heavy
I wanted to give this vacuum cleaner a high rating because of the awesome suction. But my back, arms, shoulders are screaming NOOOOOOO!!! It really does have the most awesome suction & I love that hair doesn't get wrapped around the roller. I'm a petite older person & have a hard time with the bulki...
3/5
sue g
9 months ago
amazon.com
Bulky
Need a light at the motor area. As soon as you remove the floor brush you don't have any light to see what your vacuuming in cracks or base boards. You have to fight with the hose just to vacuum the dog hair from the couch.
3/5
Katana
6 months ago
amazon.com