What is Looria?Sign up
Open menu
Wireless Speaker 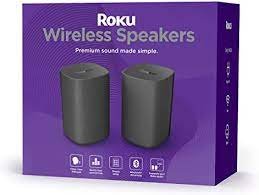 i have two sets of the roku wireless speakers. bought one set and they were so good four months later (these were in 2020) purchased the second set. in the last month the second set began disconnecting .. it started out once a week and then became several times a week... would have to forget both speakers and then unplug and unplug the tcl tv and then re plug in and start the pairing process all over. anyway, i opened a support ticket with Roku and within a day they offered a replacement set.

Neutral
sogalitnos
2 years ago
reddit.com/r/Roku
TCL Roku TV Wireless Soundbar hands-on: Great sound, easy setup, limited appeal
The Roku TV Wireless Speakers are the obvious alternative to the TCL, and while they also started at $180, they became $150 over time, and this is where the TCL should be priced too. The Roku speakers offer more flexibility because they can also work as rears for a Roku system -- including this TCL speaker as well. The TCL is a one-trick pony in comparison

Positive
Ty Pendlebury
1 year ago
cnet.com
3: Streamed bluetooth from phone to sound bar using spotify app and same song **NO CRACKLE**?!?!?!. 4: Moved subwoofer/disconnect still crackles. Checked with equalizer settings on spotify app, still Crackles. So it only crackles while I stream music off of the Spotify App that is on the Roku TV that came installed on my TCL Series 5, 55 inch TV?!?!?!?.

Positive
Will Greenwald
1 year ago
pcmag.com
So, I have a TCL Roku TV and the Roku wireless speakers. I have Xfinity internet (xb7 gateway). The speakers worked well until a few mos ago. Then, randomly, the speakers would disconnect for a few seconds while at the same time, the TV lost wifi connection.

Positive
Chris Welch
1 year ago
theverge.com
10.5 Sucks
Before I could do it with about three presses of the button and very, very rapidly with a minimum of disruption to my program. Now I have to fumble through several levels of menus that takes 10 times longer and is very disruptive to my viewing. I'm absolutely pissed off at this utterly worthless and disruptive change to my TV and Rokus.

Negative
Yara_Greyjoyy
1 year ago
reddit.com/r/Roku
Too weak to handle YouTube TV 4K w/5.1 Audio
So I returned mine. The issue is that the even with the Roku Streambar Pro, the processor is too weak to do YouTube TV 4K live - between streaming the 4K and orchestrating the audio feeds to the different wireless speakers, the stream would buffer every 30 seconds. Played back the same video back on...
3/5
karpodiem
4 months ago
amazon.com
Help: CCwGTV interrupts shows by responding to Google home broadcasts and lighting changes, etc. Its HDMI-CEC even turns on our TV to do so. Didn't used to do this, and I don't know how to turn this feature off. VERY irritating!
I had an issue where one of our nest hubs was randomly triggering actions on our Roku TV. Every time we use the hub, like asking the weather or changing the lights, it would do the request and then it would either pause whatever we were watching on the TV, or unpaid it if it was already paused. If the TV was off, sometimes it would turn it on. I went into Google home and creates a separate room just to locate the TV in and keep it separate from any of the hubs, which worked for a while but then it started acting up again.

Negative
maybelying
1 year ago
reddit.com/r/Chromecast
Roku wireless surround review
The cosmetic appearance is good , sound quality of the Roku surround speakers is poor, little highs and can?t barely hear the sound coming out unless you select music mode but still is lacking highs and mids, volume on this pair could or should be improved.
3/5
hector
3 years ago
walmart.com