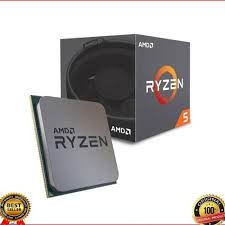 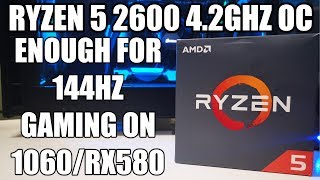 AMD Ryzen 5 2600 Review - A High Refresh Rate Gamers Perspective
My only complaint with this preset is the draw distances. I busted a gut thinking. There was a buggy ahead of me

Negative
TheFullSetup
2 months ago
youtube.com
Hello Everyone! I have recently built a gaming pc with a Ryzen 5 2600 and GTX 1660 SUPER.

Positive
Juxae
2 years ago
reddit.com/r/minimalism
Great as far as I know. 🤷🏻‍♂️
I ordered this at the height of this pandemic. I figured it would be a good thing to build a desktop with my kiddo and it's something we could do together. I did all the research, found the best processor I could...then I bought this one cause that other one was like two grand at the time. So I put ...
3/5
Random Buyer
1 year ago
amazon.com
I went from a Ryzen 5 2600 to a 7 5800x and I really did not expect such a big performance difference.
That's pretty much jumping three mountains at a time. That's basically the same thing that I felt after upgrading from Intel I5-2600K to AMD Ryzen 2600. Same number, but the performance jump was stupidly high, I thought I was living under a rock for being ignorant about the generational leap per new CPU.

Positive
2 years ago
reddit.com/r/buildapc
Gets the job done, but terrible design for cleaning
I ordered this to go with my Asus Prime B450M-A mother board. I think it would do a good job of cooling the CPU if the B450M (advertised as linux-compatible) could control its fan (I'll write a separate review for that issue). For cleaning, this is the worst cooler design I have seen in 35 years of ...
2/5
D. Stevens
1 year ago
amazon.com
Simple Questions - February 09, 2021
Thanks. AMD Ryzen 5 2600 3.4 GHz 6-Core Processor.

Positive
Sofiadelfornox
2 years ago
reddit.com/r/buildapc
very good CPU, terrible cooling
I'm not sure why I did this, but when I was assembling my new computer I was feeling grouchy about thermal paste and told myself that surely AMD is selling adequate cooling for their products when used at the stock settings they were designed for. I wasn't going to overclock so the product they are ...
4/5
Sarah
4 years ago
amazon.com
WILL MY LAPTOP WORK WITH VALVE?
Should work great. I was running 120hz (although probably only pushing about 100 fps) on an RTX 2060 and Ryzen 5 2600 before I upgraded.

Positive
GenericUsername2754
1 year ago
reddit.com/r/ValveIndex
Only one problem
This is an upgrade to my old FX-6300 and a vast improvement. I use it primarily for video gaming and the performance in games like Total War: Warhammer 1&2 is markedly better. Load times, turn times, and frame rates are both very fast now and with the addition of an SSD and the recent turn times pat...
4/5
Steve
3 years ago
amazon.com
The cheaper the better as I'm on a budget due to corona. My PC is a Ryzen 5 2600, and a GTX 1660 Super, so preferably some G-Sync, but not necessary.