What is Looria?Sign up
Open menu
Tablet 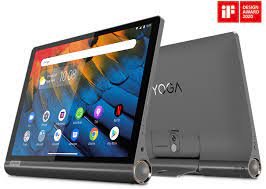 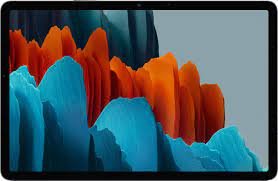 SD Quality Streaming!?!?!?!?
I actually purchased a "Like New" condition one for $179. For that price, it will work me. I just have to lower my standards when it comes to streaming.
2/5
8 months ago
amazon.com
Yes, the hardware is great but....
Figure out the cost and what's important to you. I also have Apple tablets, the 9.7". I needed a larger screen for music applications and the 7+ works great
4/5
1 year ago
amazon.com

Lenovo Yoga Smart Tab Review
Lenovo claims the tablet's 7,000mAh battery can provide up to 10 hours of video playback. In our rundown test, in which we stream HD video over Wi-Fi at full brightness, we managed to get just a little over seven hours. Turn down the brightness a bit, however, and you should be able to get Lenovo's quoted 10 hours.

Positive
8 months ago
pcmag.com
Artist Review - Digital Illustration & Design
I value the openness of the Android OS. - Battery life is great when using the Tab for regular tablet stuff. But when it comes to doing serious art, the battery life can drop from about 10hrs to about 4hrs. Rarely am I far away from a power source longer than 4hrs though
5/5
2 years ago
amazon.com

Great for media, love the design
Tablet is fast, not a slouch in that department. Switching between apps is smooth and fast. The screen is bright and crystal clear, way beyond that of the Fire 10 tablet. My old Fire 10 tablet is also a slow glitchy device and this Lenovo runs circles around it
5/5
2 years ago
amazon.com 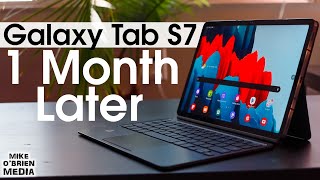 SAMSUNG GALAXY TAB S7 [One Month Later]
So like Microsoft apps, Samsung apps, some Adobe apps like they work pretty well, and then of course some Google apps work pretty well also. But the f...

Not my first choice
. Resolution not very good and when you increase the picture from small to full screen is very fuzzy and pixelated
3/5
2 years ago
walmart.com 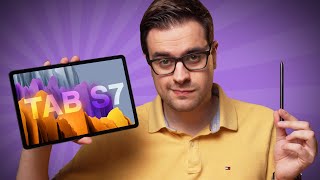 Samsung Tab S7 Review: The Best Android Tablet Yet?
And this is what it looks and sounds like when you're using that front-facing camera on the Galaxy tab S7. It's not bad, it's about webcam quality, bu...

Nice tablet, a bit unbalanced
It is very heavy compared to a Fire HD8 so the unbalanced issues is thought on the wrist. When rotated to wide viewing (long edge horizontal and short edge vertical) the unit is not balanced in the hands. It has a kickstand for this mode but when using the tablet on a table, the kickstand does not support the unit angle needed for viewing on a standard table and chair (height). The unit has to be tipped back so far, the friction control on the kickstand can not hold the tablet up
4/5
1 year ago
amazon.com
Yet another great Samsung tablet
Samsung makes a great product and this Galaxy Tab S7 works well. You can find plenty of reviews online. My only real complaint is that this one is heavier than my previous tablets so it's more of a chore to hold for a long time such as when watching several TV shows in a row or a full-length movie. My iPad is lighter as are my previous Samsung tablets
5/5
5 months ago
amazon.com

Love everything about this tablet!
It’s fast, the screen quality is excellent, the battery life is great and for an extra $15 the attached stand was worth it. My daughter has a Lenovo laptop that’s awesome so I had a feeling this tablet would be, too.
5/5
1 year ago
amazon.com
Received my item unsealed. Returned it the same day it was delivered. Amazon customer service 10/10.
Boom! Dynamite! Tablet is vibrant, crisp, the sound and video quality 10/10, noticed unable to use finger as stylus for Samsung installed apps, tablet did not recognize I wanted to use finger instead of stylus to doodle as s-pen was inoperable (not an issue on Galaxy S7+ FE), while exploring factory given apps, the tablet would occasionally overheat (unsure if it's this specific tablet or for Galaxy in general), tablet was propped on a stand with no heavy programs running, just factory apps, no reason for that degree of heat. Brightness on low, with vivid mode off, battery drained quickly from 100% to 60% after about an hour using factory apps, no YouTube yet. Not sure if tablet or Galaxy product in general. YouTube video quality was clear, crisp, true to life and quality of original uploader
3/5
10 months ago
amazon.com